Glen started his professional career in graphic design creating things like print brochures, and his work later expanded to include web design and things like ebooks, that are now done online and in the cloud. Glen has stayed with his graphic design work over the years and still manages a small group of clients.

On top of all that, if you look closely at his photo, you'll notice he's holding a musical instrument. In addition to the work he does for me and for his graphic design business, Glen is also an award-winning music composer for an instrument called the recorder. He's also a concert musician on a number of different varieties of this instrument. If you're not familiar with it, the recorder is a wind instrument that was popular during the Medieval, Renaissance, and Baroque eras and had a large following back in the day. Today, the recorder is better known as that plastic instrument that many of us learned music on for the first time in third grade.

It's certainly good to have a Renaissance man with a wide range of skills managing your back office. You never know what's going to come up day to day in the world of financial services.

Glen is my Operations Manager and helps with my back office operations on things like processing account applications and bookkeeping.

Glen also attended Cornell University and graduated with a degree in Communications.

But the degree taught me to think logically and figure things out, and that's a skill that I've used every day of my life since then. I also made it a point to take a lot of other courses while at Cornell to round myself out. I've found people are actually more interested in talking about things like international relations, music, and art history than they are about physics, so I'm glad I studied those things as well. 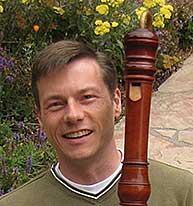 I'm a scientist by training, and I graduated from Cornell University with an undergraduate degree in Theoretical Physics. I went straight into the Navy after college because the government paid for my education on an ROTC scholarship. As a result, I never actually got a job solving equations on a white board or pondering the origins of the universe.

To repay the debt I owed to the government, I had to drive warships around the Pacific for about five years. I wasn't expecting it at all, but the Navy turned out to be a REALLY cool job for a young person right out of college. And, as a budding finance guy, it wasn't lost on me that the scholarship meant that I had no student loans to repay. And, because I didn’t have the loan payments while I was in the service, and had a bit of extra cash flow, I began to experiment with investing and developed an interest that turned into a lifelong passion.

After investing meticulously for about five years, I decided I would go all-in on finance and I took my entire investment stash and applied it to an MBA. By this time, I realized I preferred finance over physics. Business School took me to Berkeley, California and I still live nearby, along with about half of my classmates. We all came here thinking we'd finish school and move someplace else, but most of us ended up deciding the San Francisco Bay Area is actually pretty cool.

After business school, I got a job as a management consultant. The pay was decent and I did a lot of great work in finance. And I made a LOT of connections that I'm still in regular contact with. But the job itself was more about bank mergers than personal finance, so I ended up looking for a another job that was a little bit closer to my sweet spot. That landed me a Vice President job at a major brokerage firm and that's where I started on the path toward personal financial planning. I liked the steady paycheck the brokerage firm offered and the job was actually very fun and allowed me to be somewhat creative. It also gave me the opportunity to accumulate a significant number of industry credentials, such as the Series 7 national brokerage license, the Series 24 branch manager license, the Series 63 license to operate in California, as well as the series 66 license that allows me to run my own investment advisory firm. Along the way I also picked up an insurance license. I don't sell insurance anymore, but I certainly know a lot about it.​

With all of those industry credentials in hand, I decided to strike out on my own. The job that I have now is my last and best. I'm self-employed now and I've been in business for myself for about 12 years and I love every minute of it.